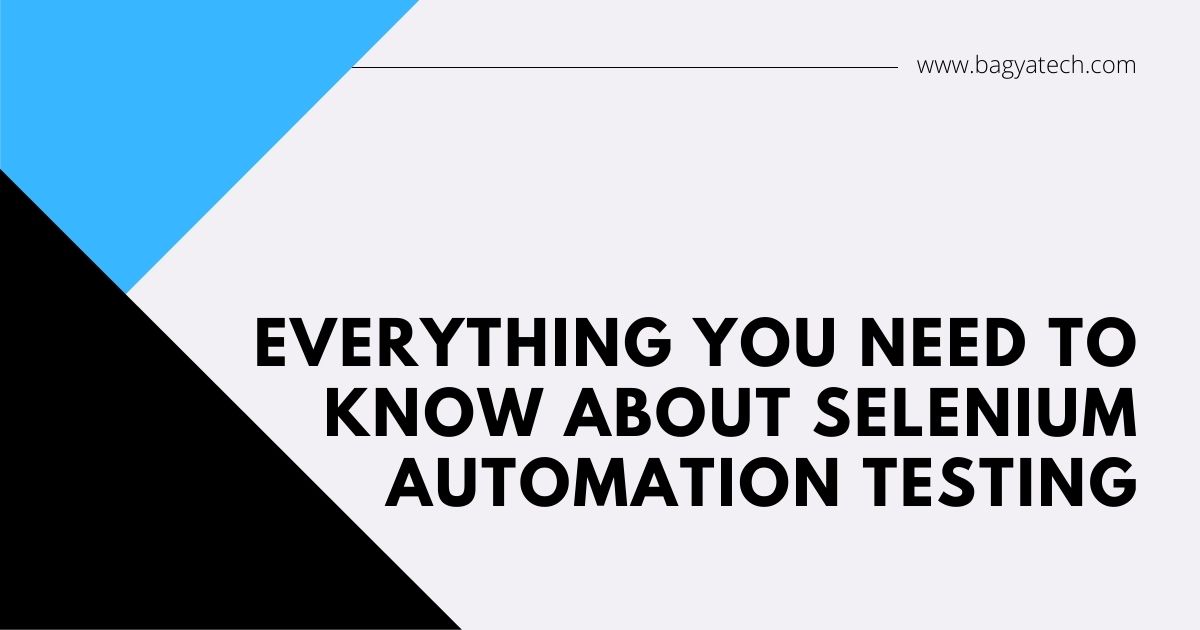 Selenium is an open-source free automated testing framework that manages web applications across different platforms and browsers. To create a selenium test script use, multiple programming languages like Java, C#, Python, etc. Testing which is done with the help of testing tools is known as selenium testing. It is not composed of single tools but the selenium has a suite of software, which are used for the different testing process according to the organization needs such as web driver, IDE, selenium grid, and selenium remote control. Start your career in the corporate field by learning new technology one of them is selenium software. Try to learn selenium through practical sessions and hard-on projects.

Why is selenium used?

The selenium testing tools support all the languages such as Java, JavaScript, C#, Python, Ruby, and Perl programming language for software test automation. You can feel free to write your scripts in any of these programming languages and the job of selenium is to convert it into selenium codes. The coders no need to learn selenium only language. Likewise, for selenium test automation you want to write the test scripts. It is done with the help of a dedicated framework every selenium supported language has this kind of features. When you choose selenium for automation testing you don’t get worried about the languages and framework support. Hence the selenium software itself does the work for you.

The selenium community is working and improvising every day to get one selenium script for every browser. The worldwide used browsers are safari, chrome, Internet explorer, opera, edge browsers, and the selenium tools are more adaptable with all the mentioned browsers. Selenium makes your work less. This shows you don’t need to write scripts for all the browsers, just one script is suitable for all browsers. There is a different type of language applicable in selenium but you can choose your specialization languages, for example, you can learn selenium with python. If you want to learn python with selenium tools then join an online training course and start learning from the beginning to the expert level.

Open source availability is one of the important things that add to the advantage of selenium. Selenium is a publicly accessible automation framework because it is being an open-source tool and selenium automation tools are free of cost. Developers and software engineers are gaining help from the selenium community for automating web browser features and functionalities. With the help of open-source features in selenium, you can show some betterment in the code and also helps to enhance the functionality of predefined classes and

functions. Because of the simplicity of generating test scripts for validating functionalities the selenium has become one of the most reliable web automation tools.

Multiple people use multiple operating tools. All these tools needed to be supported by the automation tools. Selenium plays a major role in supporting the features of the different operating systems. Since selenium software is a highly portable tool. It supports different operating tools such as Linux, Mac OS, Unix, Linux, etc. Over any platforms like windows, you can create selenium test suites. Likewise, you can also execute the same test scripts on other operating platforms. Without laying much emphasis on the platform, software testers and developers can start writing their test automation scripts on a suitable running platform.

Selenium automation test scripts are reusable. These tools can be used across various browsers and operating systems. Selenium testing tools need third-party support if it is not an all-inclusive web automated testing tool for the purpose to broaden up the testing process. For example, you have to integrate selenium with Junit and TestNG for organizing test cases and reports. Although with this step you have to integrate the selenium with the CI/CD tools like maven, docker, and Jenkins for achieving continuous testing. For performing image-based testing selenium also needs to integrate with tools like Sikuli. The tester can integrate the selenium with various management tools, the cross-browsing testing is performed with cloud-grid such as Lambda Test.

Selenium automation testing is very easy to use. It assists in a user-friendly interface so that you can feel free to create and execute test scripts effectively and easily. While the test is running on the platforms you can also watch them directly. After completing the running process, you can analyze the reports of the selenium and continue the action provided in it. In case of any need, the selenium community is always available. You can communicate with the selenium community and ask all your queries.

The time and efforts are saved through automated testing. Parallelly you could execute multiple tests with the help of a selenium grid. If you want to learn selenium with java then join in any of the online courses through this you can shine in your career as an effective software tester. By executing the testing parallelly you can reduce your execution time. You can make your test in hundreds of browsers parallely with the help of cloud grid through cross-browser testing hence it saves more time.

Easy to learn and use

Selenium’s main aim is to write minimal code to automate website functionalities rather than it is not done by writing a hundred-page complex algorithm. For testers and developer’s selenium websites documentation is helpful to start the selenium automation testing. Selenium tutorial, testing, and development supports are very helpful in a rapidly growing community. By using the Selenium IDE extension on the Firefox browser, you can ably record and play the functionality to generate selenium scripts.

The above-mentioned reason shows the importance of selenium automation testing. By learning these techniques you can sustain in the It field and would be able to extend your knowledge towards the new field.